All body parts and organs can be treated by needling within this area. AA is a three-tiered system making it imperative to needle the correct depth for different conditions. (Note 1) 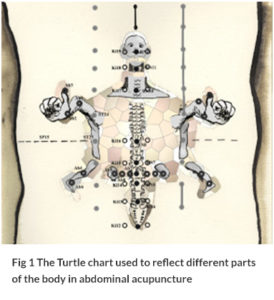 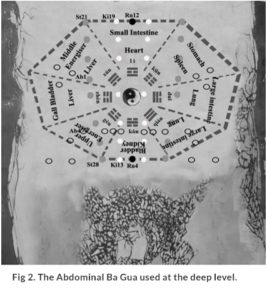 What gives Abdominal its super powers?

The area of the abdomen known as the Dantian which has great significance in TCM, Qi Gong, Tai Qi, Yoga and many other therapeutic and exercise based systems. It is where our life force, our Jing (essence) originates from. It contains powerful Ren points including, Ren12 (Zhongwan), Ren10 (Xiawan), Ren6 (Qihai) and Ren4 (Guanyuan), these points are a commonly used prescription called “Bringing Qi home” which invigorates the Kidneys and Spleen by nourishing both pre and post heaven (natal) Qi.

AA differs from other micro systems in the following ways:

The abdomen contains both Yin and Yang meridians and has access both directly and indirectly (through the Biao Li relationship of the Kid : UB, Ren : Du meridians) to all the Ordinary and Extra ordinary meridians and their reservoirs of Qi, Back Shu, Front Mu and other influential points.

Other energetically important factors of the Abdomen include:

Unlike other micro-systems which utilise imaging alone, AA utilises all these powerful factors and is multi-dimensional, ensuring AA treatments gives superior results. The treatment of painful muscular-skeletal and sense organ conditions are carried out at the most superficial (Heaven) level of this three-tiered system. They can yield results with 80-100% therapeutic effect within just a few minutes. This level uses the Turtle hologram to image the human body.

AA treatments are less intrusive than other methods and needles used are of a narrow gauge (0.20-0.25mm), they are inserted quite superficially to a depth of between 0.1 – 0.5cun in most cases, as a result most clients prefer AA.

Maria was a 39-year-old first-time mother of a seven-week-old baby, who was struggling against-all-odds to breastfeed. She developed painful lumps on her right breast and not recognising the signs let it become a painful infection for which she was treated with antibiotics two weeks previously. Maria was determined not to let this occur again and sought acupuncture as a means to this end. She was familiar with AA and was delighted that it would not involve any needles near her affected breast. 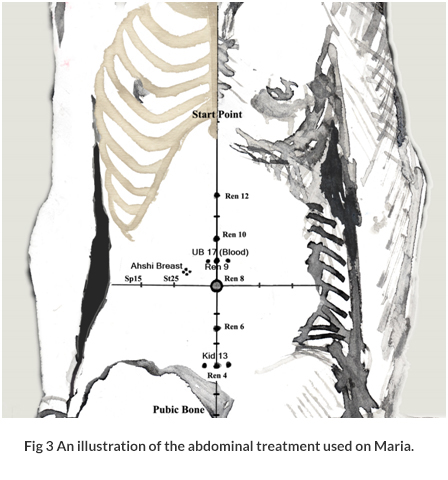 Maria had a difficult birth and haemorrhaged heavily afterwards. For this reason it was decided to use ‘Bringing Qi Home’ with bilateral Kidney13 (Qixue) to re-enforce the action of Ren4 (Guanyuan) of nourishing the Kidneys. Points along the Kidney Meridian, level with Ren9 (Shuifen), served a number of functions depending on the depth. Ren9 (Shuifen) is level with thoracic vertebrae no 7 (T-7). The needle depth was initially left at 0.4-0.5 cun to nourish Blood by stimulating UB17 (Geshu), the influential point of Blood, for approximately 20 minutes. These points are also level with the breast area and, in order to act on the chest area, the right needles were withdrawn to a more superficial depth of 0.1-0.2 cun for the remaining 20 minutes of treatment. Ren9 (Shuifen) was also needled to help reduce the swelling of the breast. Ahshi points were located medially and inferior to St24 (Huaroumen) on the right and these were needled superficially until all the nodes were dissolved and Maria’s pain was gone. A four needle diamond pattern was used to achieve this (see Fig 3).

After the first treatment the pain and discomfort had reduced by approximately 50%, and she was advised to line her bra with raw cabbage leaves (they act as an anti-inflammatory). She had three more sessions using the same protocol, and the mastitis was cleared.

Please note that all illustrations are the property of Dave Shipsey and should not be reproduced without permission. 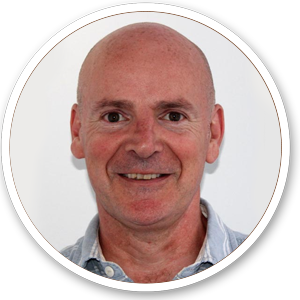 Dave Shipsey is a Registered Acupuncturist, author and teacher. He has been practicing acupuncture in Dublin since 2001 and specializing in Abdominal Acupuncture since 2002. Dave completed a “Train the Trainer” program in 2011 to learn the best and most up-to-date methods of communicating knowledge.

Dave Shipsey has designed his own Abdominal Acupuncture (AA) training program (CPD accredited) for qualified and final-year student acupuncturists. He has run the program in Ireland, the UK and France; each course has received great reviews and testimonials from participants. The courses have evolved organically over the years and Dave feels that he has now found the perfect balance of theory and practice. 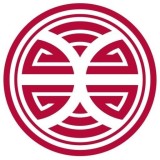